Our Story – a family company started by John and Angelo Notaras John and Angelo Notaras display the computer ignition system that won the ABC Invention of the Year Award in 1975. The floor of the International Inventions & Technology Convention Geneva, Switzerland.

Winner of International Gold Medals and other international awards, Atom Industries, an Australian company, has been inventing and manufacturing innovative quality products for many years. Atom’s international award-winning inventions are sold in many countries worldwide.

Atom’s policy is to produce world class innovative, affordable, and quality products that will serve their owners many years of productive and enjoyable use; and to continually develop Atom products. Atom invests heavily in Research and Development and maintaining its fulltime in-house R & D department.

Atom’s technical team utilises the most up to date computer design programs. All Atom products are rigorously and punishingly tested, both in the factory and in field conditions before they are put onto the market, thus ensuring long life and withstanding tough conditions.

The tough reinforced polymer components used in Atom products are so strong, they have been stress tested to withstand up to 680kg (1500lbs) of weight. This ensures that Atom products will still be working in years to come when other brands have already worn out. CAD-CAM design of parts and tooling

We care about the environment and our carbon footprint. Our factory in Lilyfield runs on solar electricity produced from Atom’s large array of rooftop solar voltaic panels. We continue to develop and produce fuel efficient, low emission engines, and additionally battery powered products.

Developed for the Atom Chainsaw produced from 1972-1978. Licensed to Japanese and American chainsaw manufacturers.

The Atom Chainsaw was Australia’s first and only fully integrated magnesium diecast, lightweight chainsaw produced. Many innovative features include a self-cleaning air cleaner that was later adopted (and still in use) by Swedish, US and Chinese manufacturers. Tariff reductions to zero forced closure of manufacture of this product.

Winner of the ABC TV show ‘Inventors’ in 1975. This patented product was used extensively as a replacement for mechanical points and condensers fitted to small single-cylinder engines with magneto ignition. Also used as original equipment on Atom’s own chainsaw production as well as supplied to US, German, British and Indian manufacturers. As a retrofit part to replace points and condensers, many millions sold and, after patents expired, much copied by overseas
manufacturers.

Originally designed in 1961 (see above), it was redesigned with innovative safety features. This Drill Attachment fitted most chainsaws, but production was phased out in 2018 and replaced by the DRILLMASTER ENGINE DRILL, which uses the Automatic Reverse Gear for the same purpose.

The Atom Edgers soon became No.1 sellers in Australian and New Zealand.

These powerful Atom edgers are used for large jobs and continuous operation. Used all over Australia and overseas markets such as; New Zealand, USA, United Kingdom and Europe. Available in 2-stroke and 4-stroke engine power.Anti-vibration(7 points) handle system reduces long use fatigue.

Atom’s new petrol powered “AIRLIFT” leaf blowers, fitted with Atom’s “SMARTFAN” design, produce a massive air blast. More than other blowers, helping you do the job much faster and with less fuel consumption.

Atom’s new petrol powered drills with the outstanding feature of automatic reverse. This allows faster hole drilling speeds and ‘auto safe’ control of the drill should it suddenly twist due to auger hitting a knot or split timber. Atom designed wood auger bits from 10mm (3/8”) to 32mm (11/4”) length are available.

2014: The Atom Factory in Lilyfield generates all its power with Solar Voltaic panels.

Not only does Atom use its own 100% RENEWABLE electricity but each year Atom produces another 300% RENEWABLE ELECTRICITY that feeds back into the grid.

The Notaras Family is Involved in the Community

Angelo Notaras received the Order of Australia and the Cross of St Andrew Award for community work and charity fundraising. Also, with John the Youth Alcohol and Drug Rehabilitation from the Greek Orthodox Church.

Angelo and John along with another brother, Mitchell (medical pioneer), and their cousin Spiro (OAM), restored the Saraton Theatre in Grafton to its former glory. It is a 1000 seat cinema (originally 1200 seats) built in 1926 by their fathers Tony and Jack Notaras. This restoration along with the addition of two new state-of-the-art 150-seat cinemas is the entertainment centre of the NSW north coast.

It is a great venue for live theatre, school concerts and activities, musical groups, cinema, public gatherings as well as cinema. The Saraton is privately funded by the Notaras family as their contribution to giving something back to the Grafton community.

In 2011 they were awarded the NSW Heritage award for the ‘Best Restoration in the over $20 million category’, competing against State-funded restorations.

As a contribution to the environment, the complex runs on solar produced electricity from its massive rooftop solar voltaic panels.

Angelo also received the Kytherian Gold Medal of Honour for services to the island of Kythera – where their parents migrated from. Their brother, Mitchell (a distinguished surgeon) donated a substantial sum to the University of Sydney to encourage post graduate research by gifted students. This has already resulted in several achievements for successful graduates. Angelo and John have also privately donated substantial sums to the University of Sydney for Cancer and Asthma research. 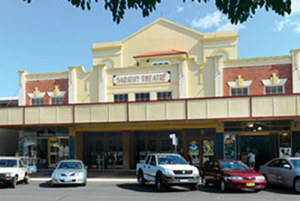